In 1976 Archer met Ray harryhausen showing him soime stop motion animation test. That meeting isnpired him to get a job in Special effects. ” I contacted Cliff Culley, a specialist in matte paintings at Pinewood studios. He had worked on several Bond films and was then creating many matte paintings for The Pink Panther Strikes Again. I contacted him and he very kindly offered me work as an assistant which entailed doing a variety of jobs such as painting the reverse sides of main titles on glass, occasional touching up of matte paintings and painting nearly two hundred cels for the disappearance of the UN building in The Pink Panther Strikes Again. This latter job could be called my first professional animation assignment” Some years later he worked as Harryhausen assistant for Clash of the titans. He then got some other stopmotion animation assignements for films like Krull or Neverneding Story.

Steve Archer with Derek Meddings and with Ray Harryhausen. 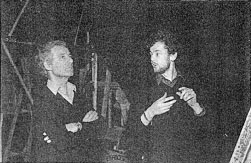 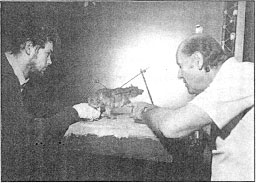