After graduating high school Pangrazio worked as scenic artist for a
television network[which?], which was a euphemistic term for “bucket
boy”, as he was charged with cleaning paint buckets, dirty brushes and
other menial tasks. He subsequently performed these tasks for a small
Hollywood effects studio, before he met Joe Johnston of Industrial
Light & Magic. It was through him that he was hired in 1978 at ILM.
Lacking any experience, Ralph McQuarrie, who taught him the craft of
matte painting, learning the trade in about three years. he worked at
ILM fropm 1978 to 85
After leaving ILM, Pangrazio co-founded Matte World Digital with Craig
Barron in 1988. Barron and Pangrazio continued to work with the crew
at ILM on notable matte-painting scenes in several classic feature
films.
In 2004 Pangrazio returned to the film industry and joined the world’s
number one visual effects studio Weta Digital in New Zealand as Art
Director.
Michael Pangrazio working on a painting for “Willow”. 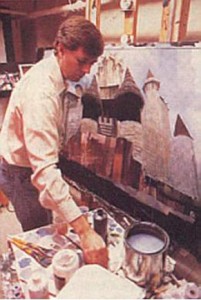 Mike giving the last touches to a painting made for “The young
Sherlock Holmes”. 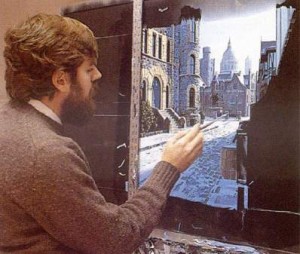 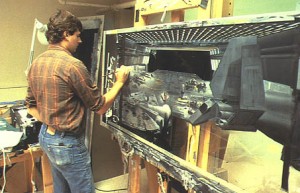