Date of birth 15 January 1931 London, England, UK
Date of death 10 September 1995 London, England, UK.
MEDDINGS: Well, I got into it by accident really, because when I came into the film industry, the only way I could get in was to do titles for pictures and this was really boring as far as I was concerned, since I had trained as an artist. It was actually Les Bowie who started me off by getting me a job with him doing matte paintings. This was really the job I wanted to do. I wanted to be an artist in the film industry. Originally I wanted to be in the Art Department. Having met Les I decided that the sort of work he was doing – matte paintings – was the type of work I wanted to do. When we started doing matte paintings, it was a highly skilled job, but people were afraid of mattes. They always remembered the worst matte that they’d ever seen, so they would avoid putting mattes into their pictures if they could get away with doing it some other way. Now, of course, matte painting has become a very important part of the film industry.
With pictures like STAR WARS, they have to use a lot of matte shots and very good ones. At this particular time there were very few mattes on pictures, so in between doing matte paintings, we had to find something else to do. Les was also very good at doing miniatures and I would help him. That’s how I got involved with miniatures. Although I do all types of effects, I seem to have got myself lumbered, for want of a better word, with just doing miniatures on a picture. On a Bond picture, I supervise all of the effects. 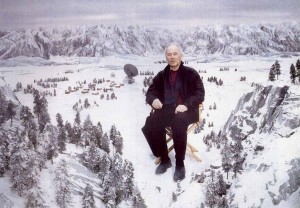 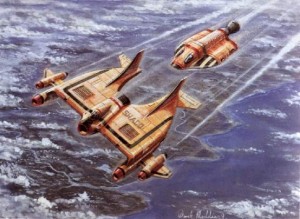 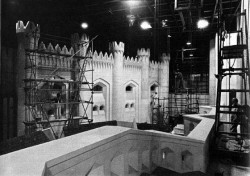 ” We built a very large six scale 40×30´miniature and set it at mid distance. We found an area near Abruzzi, Italy where we could put the miniature castle a certain distance away from the camera and make it look full size by shooting at a very low camera angle with rocks built to scale, in perspective, up to the castle. We laid out a path, also in perspective, right in front of the camera so that a group of horses could actually travel along it toward the castle.”

Text and Black and White photo by American Cinematographer magazine.

Three images from the film.