Bill Brace worked at the FX house Project Unlimited run by Gene Warren snr, Tim Barr and Wah Chang. he was mainly matte artists but also made some FX design and painting miniatures.

Extracted from an interview with animator Don Sahlin.
“They had a guy in another room, Bill Brace, an artist, and he was doing all these matte paintings where the trees were blooming and the apples were growing. And he painted the future scenes, too, where you saw the topography of the land changing, and the Eloi temple being built. The whole dome of that was a painting matted in, and the stairway leading up to it was part of MGM’s old QUO VADIS set.”

To read the whole interview go to: http://www.colemanzone.com/Time_Machine_Project/don_sahlin.htm

Bill Brace with the FX staff at project Unlimited. Photo from the Book “Dinosaurs, dragons and drama” by Jim Danforth. 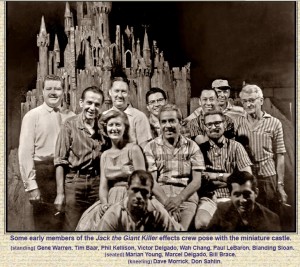 Two paintings for The time machine. 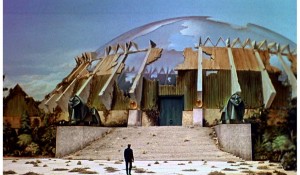 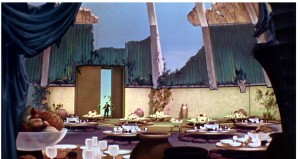