“In March 1988, I began working at The Buena Vista Visual Effects Group (Disney, for those of you not in the know) as an apprentice matte artist, fresh out of art school. I spent the next 7 years in the matte biz…mostly at Disney…though I also did a bit of freelance at other studios.
I started in the matte business, only a few years before the digital revolution happened. I was fortunate to have been one of the last of the matte artists who actually painted on glass…with real paint…which means that I was also one of the first of the new breed of matte artists that painted on computers, when my Matte Department went digital a few years later.”

Paul Lasaine working on a painting for Dave(1993) 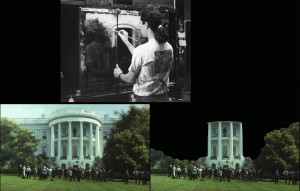 To see more samples of his work visit his blog: http://paullasaine.blogspot.com/ 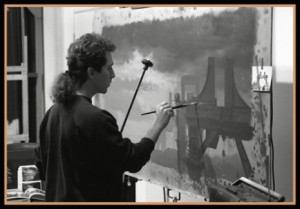