Date of Birth 28 November 1903 , Paris, France
Date of Death 4 November 1968 , Los Angeles, California, USA
At 1933, he entered at Fox matte department under Fred Sersen supervision.Although he only started receiving credit in 1958, Emil Kosa Jr. was a matte artist at 20th Century-Fox for thirty-five years and was responsible for the painting of the famous 20th Century-Fox “searchlight” logo, a variation of which was originally done by Kosa in 1933 for 20th Century Pictures before they merged with Fox Film Corporation in 1935.With the introduction of CinemaScope the logo was altered, aslo by Kosa and was used till 1981.

Member of the National Academy of Design and the California and American Watercolor Societies. Son of Emil Kosa. 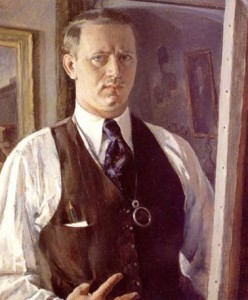 One of the most famous images from the movie “planet of the apes” is this matte painting by Emile Kosa.