Walter  Hall was primarily a set designer, his most famous creations was the Walls of Babylon built by D.W.Griffith`s “Intolerance” (1916).

He soon developed a new method similar than the glass shot. He painted the art elements on the scene on composition board, cut them out with edges develed away from the face, and mount them in the foregorund. His sense of perspective was flawless, and it is virtually impossible to detec his trickery. He patented his modus operandi in 1921.

Walter Hall drawing for the Babylone set on the film Intolerance. 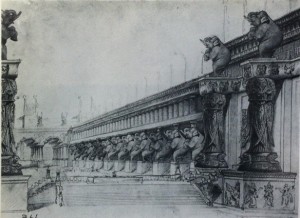