Briography:
Paul A. Grimm (1891-1974) was born of German parents in King Williams Town, South Africa on January 11, 1891. When brought to the United States at age seven, he already showed promise as an artist. At 18 he won a scholarship in Rochester, New York for art study at the Düsseldorf Royal Academy. After many years at that prestigious school, he moved to Hollywood in 1919 and began his art career painting backdrops for the movie studios. Leaving the movie capital, Grimm settled in Palm Springs in 1932 and remained a resident there for the rest of his life. He maintained a small studio-gallery in downtown Palm Springs at 428 N. Palm Canyon Road where such notables as President Dwight D. Eisenhower often visited and shared confidences. Eisenhower once wrote, “I profited from the experience of seeing how a real artist creates the effects he wants.” Although Grimm painted scenes of the High Sierra (where he often could be found in summers), missions, and Indian portraits, his fame lies as a painter of the southern California desert and its many moods. One reviewer once wrote, “His canvases of Mt San Jacinto, which for their sheer magnificence and power of conception and execution, rank as probably the finest work ever done on the subject.” Grimm died in Palm Springs on December 30, 1974. Exhibited: San Diego Exposition, 1935. Works held: Nevada Museum (Reno); Bank of America (Palm Springs); Palm Springs Post Office; Irvine (CA) Museum. 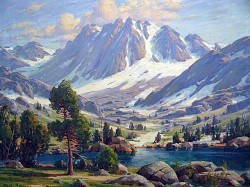 Some images of his matte work for Noa´s Ark. 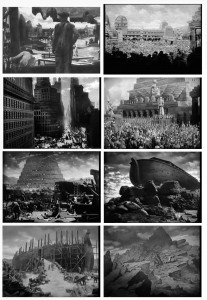