Landscape painter James Fetherolf’s work is noted for its precise rendering of fine detail, a skill he may have mastered during his years as a background artist for several Hollywood film studios. Fetherolf was born in Nazareth, Pennsylvania, in 1925. He attended Syracuse University; and after graduating in 1949 he moved to California, hoping for an acting career. For five years, while struggling to develop his acting career, Fetherolf worked as a part-time matte artist for Twentieth Century Fox Studios. The difficulty of finding acting jobs eventually convinced him that his future in the arts lay in painting. He then returned to Fox full-time. In 1957, he moved to Walt Disney Productions. Fetherolf claims that his years at Disney were educational in several ways — partly because the standards of perfection were very high, and partly because his work was tied to deadlines. He produced detailed paintings on glass, usually three or four feet in size, of cities or landscape scenes. These “matte shots” were later combined with live action. His work appeared in such classic films as Zorro, Pollyanna, Mary Poppins, and Third Man on the Mountain. After a visit to a local art gallery, during which he decided he could do at least as well as the artists represented, Fetherolf turned to the fine arts. He began by painting seascapes, which were enthusiastically received. These and his landscapes had become so popular by 1969 that he left the film industry and devoted himself to oil painting. The dramatic quality in Fetherolf’s paintings is his ability to capture the reaction of light a quality most evident in the work of the great landscape artists of the nineteenth century. His paintings are also distinguished by clarity of detail. For example, individual timbers are discernible inside a distant barn; and cacti on the horizon are individually painted. He is also known for the moist, billowing quality of the clouds in his large skies, as in “Spirit of Summer” (date unknown, Simic Galleries), a quality he achieves by working on the sky in each painting in one sitting while the paint is wet. Fetherolf has the exceptional ability to bring the viewer into the scene in the paintings he creates. The viewer can feel the warmth of the sun; the coolness of the shadows; the approaching storm; the first spring rain; and the early snow clinging to buildings, trees, and the land. Fetherolf has received seven gold medals from the Franklin Mint Gallery of American Art, and was selected to paint the centerpiece work, America! America!, for the Mint’s “America the Beautiful” series. His work was also represented in the Bicentennial exhibition of the R. W. Norton Museum in Shreveport, Louisiana. 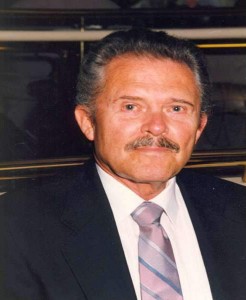 One of Fetherolf paintings. 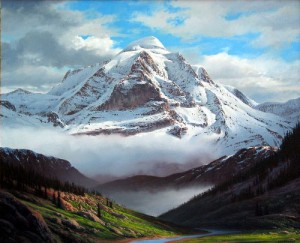