“The artist I worked with most often was Doug Ferris. We were both employed on Roy Field’s projects in the early to mid eighties: ‘Superman III’, ‘Santa Claus’, ‘Supergirl’, ‘Labyrinth’, ‘The Adventures of Baron Munchausen’, ‘The Last Days of Patton’, Erik the Viking’, etc. In my opinion, Doug Ferris was possibly the best of the British matte painters.”

From John Grant
“Doug must be accredited with the introduction of the `soft matte technique` because in the early days, the painting was used as its own matte, this made it very hard for the camera crew as they had to wait for the artist to finish painting before they could start work. The introduction of the independent soft mattes made it possible to carry out much of the photographic work before the painting had to be photographed. It also made joining the original scene and painting easier as one did not have to contend with hard join lines, it also helped with camera unsteadiness. This was a great step forward and I don`t think Doug was truly given the credit for it.” 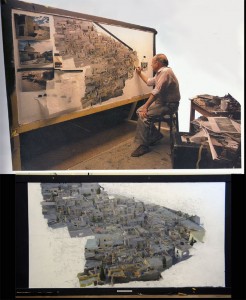 Doug Ferris was responsible for this painting  at 1997, probably one of the last glass painted traditionally.