W. Percy Day was born on September 19, 1878 in Luton, England. Day was hired by Ideal Films in Borehamwood, near Elstree, in 1919. Here he was initiated into the art of visual effects techniques, first mastering the glass shot and the Hall process. As luck would have it, at the time Day joined the Elstree studios, the British movie industry was suffering an eclipse. The French film industry, on the other hand, was booming which encouraged Day to emigrate there, in 1922.
In 1932, Pop Day returned to England, moving into a cottage in the village of Iver (Buckinghamshire), near the Elstree studios.From 1936, Day directed the matte department at Denham Studios, the state-of-the art studio founded by Korda.Poppa Day remained at Denham Studios until 1946, when he joined Korda at Shepperton Studios as Director of Special Effects. He  retired officially in 1954 at the age seventy-six but continued to work in an advisory capacity for the studios. 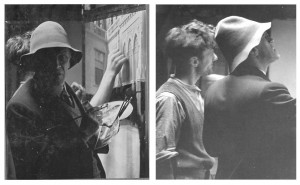