Illustrations for the title creature “The Asphyx” 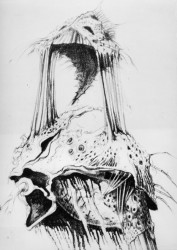 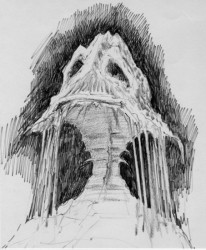 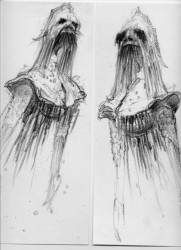 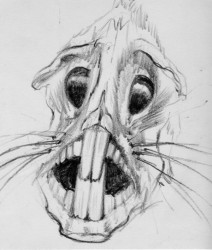 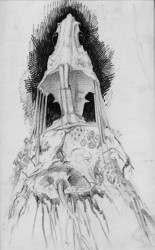 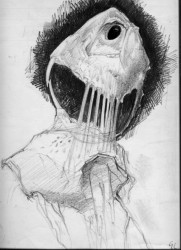 Image from the film .

The horror picture (movie) I most vividly remember was “THE ASPHYX”.
(released in 1973 my recent researches inform me). I was asked to design the Asphyx (the title object of the film). The storyline of the film sounded pretty well unbelievable but……work is work!!

What is also associated with the film for me was the fact that the project was to be celebrating a last piece of filming by legendary cameraman Freddy Francis – a kind of ‘fun’ filmmaking/party.

The ASPHYX was a pretty weird project. I in fact designed not only this unbelievable human ‘Asphyx’ but also its guinea pig counterpart. the sculpture and modeling department made three-dimensional clay models of both ‘objects’ from my drawings. Flexible moulds were then made and passed over to ‘Benditoys’- a local toy manufacturer which the department used quite frequently. When the foam plastic models were returned to me (with flexible metal armatures inside) they were painted to suggest ripped and rotting flesh etc.

Ted Samuels did all the animating of the ‘objects’ on the set and at the first rushes, I clearly recall everyone (except Ted) holding their sides and rolling in the isles as the grotesque ‘object’ danced around doing its thing !!