Biography:
biography from the Archives of AskART:

Jan Marinus Domela (né Johan Domela Nieuwenhuis) was born in Amsterdam, Holland on August 22, 1894. He arrived in San Francisco in 1915 during the excitement of the Panama Pacific International Exposition. Opting to become an artist, he studied at the California School of Fine Arts and at the Los Angeles School of Illustration. Feeling the need for further training, in 1925 he returned to Holland and entered the Rijks Academy and continued at Académie Julian in Paris.

In 1928 he returned to California and for 40 years worked in Hollywood in the art department of Paramount Studios for whom he created their mountain logo. His artwork on “The Ten Commandments” earned him an Academy Award. In his leisure he painted many plein air scenes in California, Oregon, Utah, and in Europe. Domela maintained a studio in Santa Monica until his death there on August 1, 1973. The artist is also known as John Domela Nieuwenhuis.

From his daughter  Johanna Domela Movassat :
My father left Paramount in late 1962. He had been on a yearly contract since the late 1950s and as Paramount was cost cutting it rid itself of all independent contractors.
My father had given up screen credit for so many films to get a higher salary – he had four children – and didn’t mind that his name was not linked to so many of the films and pictures that he had worked on. He had started working in the industry in the 1920s and by 1927 he was Paramount’s matte painter which he did for close to forty years.
By the 1960s the industry, according to a note I have from Chesley Bonestell to my father (dated June 9, 1960) “seems to be pretty well shot” and it was with great frustration that such wonderful artists as Bonestell, my father, and others watched their years of work thought little of. My father, however, hung on in the industry doing free lance work for Columbia, Fox (20th Century), MGM and Film Effects of Hollywood. For MGM he did “Unsinkable Molly Brown” (for that film he did the mattes when Debby Reynolds and Harve Presnell are dancing through Europe – scenes of various cities pass by them as they danced on the dirt lot at MGM), and “Greatest Story Ever Told” (The mattes my father worked on for “Greatest Story…” were the overhead view of the city of Jerusalem and the long view from outside of the city and its walls) , for example, and for Film Effects he did “Hawaii” and a number of TV shows.
He was also a few months here and there at Columbia and Fox (20th C), but his last stint before leaving the industry all together was at Film Effects of Hollywood (“Hawaii” is the only film that I remember him telling us about there, but I know he did TV for them as well).

In 1967 he wrote a letter to Lew Wasserman (chairman of the Motion Picture Producers Association) decrying the lack of matte artists available in the industry and the lack of young trained professionals.

By 1968 he removed himself from the industry and concentrated on his own painting, opening a gallery in Santa Monica.

Jan on his Studio with a glass painting. 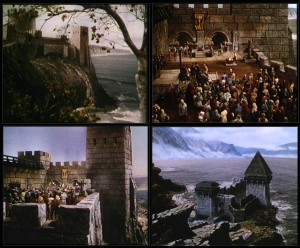 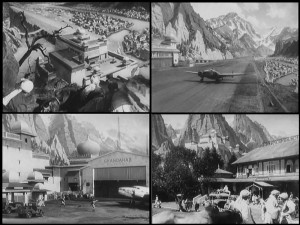 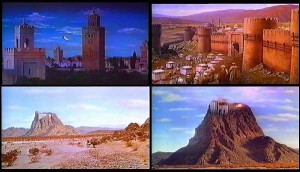