Extracted from an interview with Dan Curry you can  read at:
http://www.startrek.com/startrek/view/community/chat/archive/transcript/1394.html

While I was in grad school, an influential person in the film industry happened to see an exhibition of paintings, found me, and suggested I look into matte painting.
On that person’s recommendation Universal Studios hired me to do matte paintings for Buck Rogers, Battlestar Galactica, Cheech and Chong’s Next Movie and others. When I left Universal, I went to work as art director for Modern Film Effects…. then I went on to Cinema Research Corporation…. as vice president and director of creative services. During that time, I was involved with a hundred and seventeen feature films and over 40 television productions. I left CRC to join Star Trek 12 years ago and have been concentrating on Star Trek ever since.

Another article about Dan Curry with samples of his pictorical art. http://www.cgnetworks.com/story_custom.php?story_id=2749&page=
Dan Curry with one of the painting he made for TV Series Galactica. 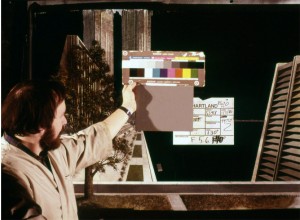