Her first job out of Art school was working on Thunderbirds  (1964) as a sculptor with Derek Meddings.
“I worked in the Sculptors workshop of AP FILMS producing the heads for the puppets.
I worked  on the baddies etc who appeared in different episodes not the stars whowere already made
when I joined AP Films. Derek and Brian were on the special Effects Stage, I was not actually working along side them.”

At 1967 she was building the moon sets for Stanley Kubrick “2001″.  She was Miss Joy Seddon then.
“I was introduced to Bob Cuff in 1964 by Brian Johnson (who was then Brian Johncock working on Thunderbirds with Derek
Meddings) when I  did some work on a Hammer Film ‘SHE’.”
She married his son in 1969. 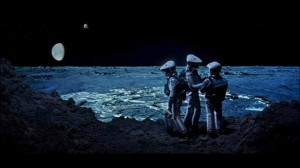 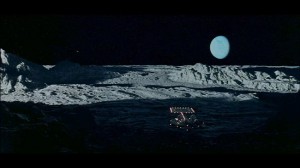 “I built the moon landscape and I worked as assistant to Bob Cuff on the
matte shots  – we used the unprocessed film, in the can, from the live action shooting at Shepperton Studios. 2001 was later moved to MGM at
Borehamwood. Bob left the picture many months before me and I continued to build the model sets which were used as establishing shots of moon surface or out of the moonbus window.”

“The shot of the monolith in a pit on the moon was shot at a weekend
this 10 min of shot of live action from Shepperton took a day to shoot.
Shot at 2 frames per second. The table top model was the landscape with the pile of earth beside the pit which was matted on to the live action of the space men walking down into the pit to look at the monolith.”