The Italian director Mario Bava was born in the coastal northern Italian town of San Remo. His father, Eugenio Bava (1886-1966), was a cinematographer in the early days of the Italian film industry. Bava was trained as a painter, and when he eventually followed his father into film photography his artistic background led him to a strong belief in the importance of visual composition in filmmaking.

Other than a series of short films in the 1940s which he directed, Bava was a cinematographer until 1960. He developed a reputation as a special effects genius, and was able to use “in camera”optical trickery to great success. His training as a painter let him to execute a number of matte and glass paintings for his films, and also used foreground miniatures and cut out photographs.

During those years, Mario Bava  had Italian painter Amedeo Gigli who executed the paintings on cardboard for him. Mario Bava then cut out and paste those small paintings on a glass and film the tricks in camera. When needed, he retouches the paintings on location to match the real landscapes.  Sometime he also used cut out photos  glued on a glass instead of paintings. 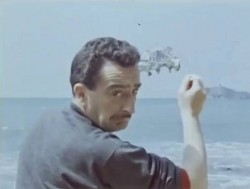 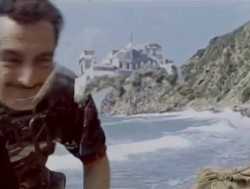 Among the directors for whom Bava photographed films were Paolo Heusch Riccardo Freda Jacques Tourneur and Raoul Walsh. While working with Freda on Lust of the Vampire (1956) in 1956, the director left the project after an argument with the producers and the film mostly unfinished. Bava stepped in and directed the majority of the movie, finishing it on schedule. This film, also known as “The Devil’s Commandment,” inspired a wave of gothic Italian horror films. After a similar incident occurred on Freda’s Caltiki in 1959, and Bava’s having been credited with “saving” Tourneur’s Giant of Marathon (1959), Galatea urged Bava to direct any film he wanted with their financing.

The film that emerged, Black Sunday (1960), is one his most well known as well as one of his best. This widely influential movie also started the horror career of a beautiful but then unknown British actress named Barbara Steele. While Black Sunday (1960) is a black and white film, it was in the color milieu that the director excelled. The projects which followed began to develop stunning photography, making great use of lighting, set design, and camera positioning to compliment mise-en-scenes bathed in deep primaries.

Through works such as Hercules in the Haunted World (1961), What (1963), and Planet of the Vampires (1965), Bava’s films took on the look of works of art. In the films The Evil Eye (1963) and Blood and Black Lace (1964), he created the style and substance of the giallo, a genre which would be perfected in the later films of ‘Dario Argento’.

Bava worked in many popular genres, including viking films, peplum, spaghetti westerns, action, and even softcore, but it is his horror films and giallo mystery films which stand out and for which he is best remembered. Recommended are Black Sunday, The Whip and the Body, Blood and Black Lace, Kill Baby, Kill (1966), Twitch of the Death Nerve (1971), and Lisa and the Devil (1974).

Bava’s son Lamberto served as his assistant on most of his films since 1965, and since 1980 has been a director himself. Lamberto Bava’s films include Macabre, Demons, and Body Puzzle.

But after the commercial failure of his later films, as well as the unreleased works of Rabid Dogs, Bava went into a decline and by 1975, retired from filmmaking all together. He was persuaded to come out of retirement at the request of his son, Lamberto, to direct Shock, as well as a made-for-Italian television movie. Mario Bava died from a sudden heart attack on April 27, 1980 at age 65. With his death, an era in Italian filmmaking had come to a close.

The upper part of the interior od the cavern was made using a glass painting by Mario Bava for the film Diabolik (1968). The camera makes a panoramic movement showing the car and the actors moving on the set enhanced by  the  foreground glass painting. 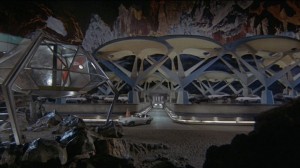 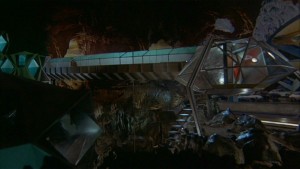 The camera in front of the glass. 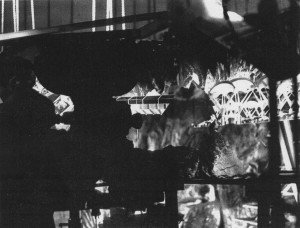 Inferno (1980)
Dario Argento :” The Riverside Drive house was never photographed head-on, but was recreated on the sets at DePaolis from photos taken on location. It only rose a couple of floors, so everything seen above that (and surrounding that) is a Bava illusion — extended by a maquette and surrounded by faux skyscrapers fashioned from milk cartons and covered with photographs. These tabletop skyscrapers were also used to optically augment shots filmed on location in Central Park. The burning building seen at the end was Bava’s maquette going up in optical flames.” 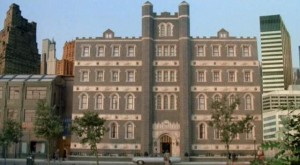 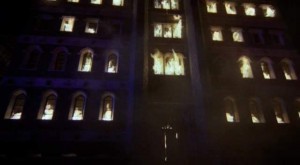 e end was Bava’s maquette going up in optical flames.”

Filmography:
(As Special effects artist) for his full filmography as director and cinematographer go to this link to IMDB. 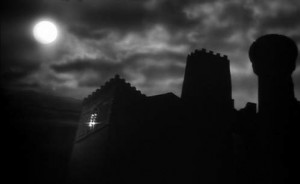