Born in Gzhatsk (now Gagarin, Smolensk region) Shortly before the war, the family moved to Moscow

At the end of the Faculty of Art VGIK in 1949 was adopted at the film studio “Mosfilm”. As an artist’s assistant, she had the opportunity to work on the then-shooting Zhukovsky (1950), Away from Moscow (1950), Przhevalsky (1952). Then, already an artist, together with others, participates in the painting of picturesque backgrounds for

And since the late 1950s, she has been permanently cooperating with the combined survey operator A. S. Renkov , together with whom she fully managed to be realized as an artist.

The scenes of historical and fairy-tale paintings, such as “Pardesi/  Going beyond three seas” (1957), “ Khovanshchina (1959), “Sampo” (1959), “The Tale of Tsar Saltan”(1967) and others, were solved using the method of subsequent drawing. In Emelyan Pugachev (1979) viewers saw, for example, the lost Kazan of the 18th century on the eve of and during the battle of the Peasant War .

In 1971, preparing with the cameraman A. S. Renkov to solve new creative tasks for the picture “Commander of the happy Pike,” they invented and then first put into practice the original method of combined “underwater” shooting.

The graphic works of Moryakova participated in the exhibitions of the Tretyakov Gallery on Krymsky Val, the Exhibition of National Economy Achievements, the North Sea Museum of the History of the City and Navy. A significant part of the sketches, as well as the artist’s drawings, are now kept in the funds of the Cinema Museum, some in private collections. 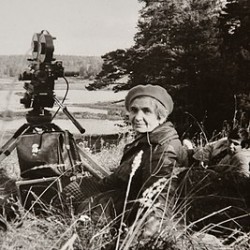 For the film Love for Love (1983) matte painting of Medieval city of Messina. 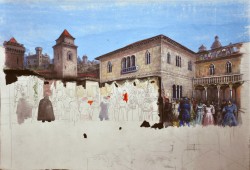 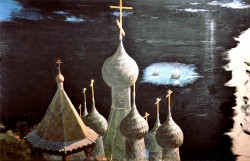 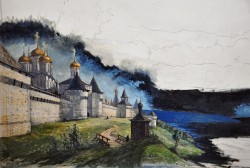 For more information and samples of her work visit this link: