Born in London, England in 1913, Ellenshaw was fortunate enough in his early twenties to get a job as an apprentice to W. Percy Day, O.B.E., the British film industry’s foremost special effects artist and matte painter. Matte shots are realistic paintings done on glass of extended sets or fantasy locations which are combined with scenes of actors in real sets. Day, the Royal Academy trained artist, took Peter Ellenshaw under his wing, working on such classics as Things to Come, The Thief of Baghdad and Black Narcissus.

After serving in the Second World War as a pilot for the Royal Air Force, Peter returned to the film industry as a matte artist for MGM’s Quo Vadis. In the late 1940s Walt Disney approached Ellenshaw to work on the studio’s first live action feature, Treasure Island. Thus began a professional collaboration and friendship which lasted over 30 years and 34 films.

In 1953, Peter and his family moved to California and Ellenshaw found himself expanding upon his matte painting work to contribute to the dramatic and spectacular special effects on Disney’s epic film 20,000 Leagues Under the Sea. The Walt Disney Studio was also in the pre-planning stages for Disneyland. Ellenshaw contributed his artistic touch to many of the attractions at the new theme park, including the first Circlevision theater show, TWA’s Rocket Ship to the Moon and X-1 Satellite View of America.

It was in the 50s that Peter fell in love with the ocean and would spend weekends painting the picturesque coves and crashing waves along the California coast. He developed a reputation as a fine art painter whose oils soon became highly sought after by collectors. He also began a lifelong association with the prestigious Hammer Galleries in New York.

In 1960 Ellenshaw did a matte painting of Rome for Stanley Kubrick’s Spartacus, while continuing to work full time for Disney studios. Peter contributed to the popular television show ‘Disneyland’ with work on Davy Crockett and Zorro, as well as classic Disney features including Darby O’Gill and the Little People, Mary Poppins and The Love Bug. For Mary Poppins Peter won an Oscar® for Best Special Visual Effects on the landmark film. He has also been nominated for an Academy Award® an additional three times; for his production design work on Bedknobs and Broomsticks and The Island at the Top of the World as well as for his effects work on The Black Hole.

In 1970 Peter and his wife, Bobbie, moved to the Ring of Kerry in Ireland and it was there that Ellenshaw created some of his most spectacular artwork: paintings of the rugged Irish coast and the beautiful landscapes of the Emerald Isle. His works were shown at a special exhibition at the American Embassy in Dublin. Today a number of his paintings can be seen in collections throughout Ireland including Adare Manor, Dromoland Castle, Waterville House and Ashford Castle.

Continued travels took Ellenshaw to many spectacular locales where he expanded his subjects to include the Himalayas, Monet’s garden at Giverny, the Mojave desert, San Francisco and New York cityscapes, America’s Cup yachting, and famous golf courses throughout the world.

In 1993, Peter Ellenshaw was officially designated a ‘Disney Legend’ at the Walt Disney Studios in a ceremony presided over by CEO Michael Eisner and Roy E. Disney. It was shortly thereafter that he was commissioned to do paintings of scenes from famous Disney features, many of which have been made into the wonderful giclées that you see here at our website.

In February of 2007, Peter passed away peacefully at his home in Santa Barbara, California. He was 93 years of age. 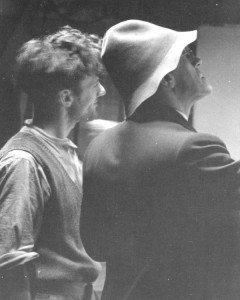 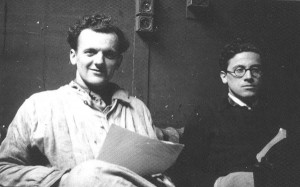 The second most influential man on Ellenshaw career, after Percy Day, was Walt Disney. They meet at England in 1950 for the film “Treasure island”. 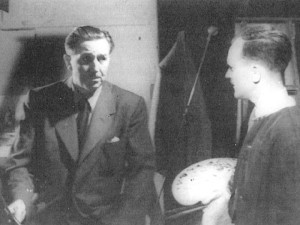 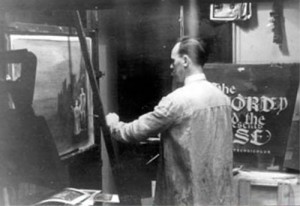 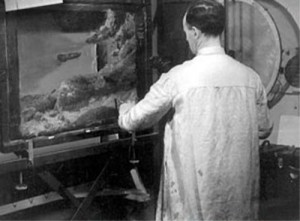 Some pictures of Peter Ellenshaw painting mattes for Disney´s  “20.000 leagues” . 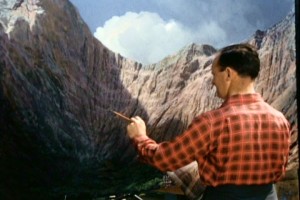 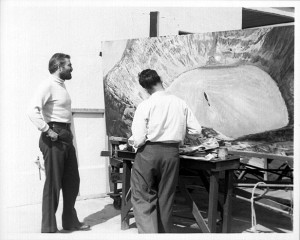 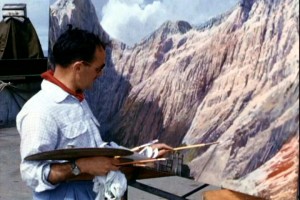 One of the first painting assignements that Disney gave to Ellenshaw, was an aerial view of  Disney Park. 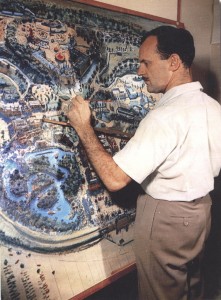 Painting and Ice cave for “In search of castaways” 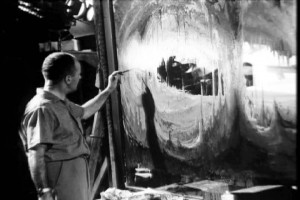 At 1979 Peter Ellenshaw worked as miniature effects supervisor for Disney film “The Black Hole”.  His son Harrison Ellensahw was responsible for matte paintings on that film. 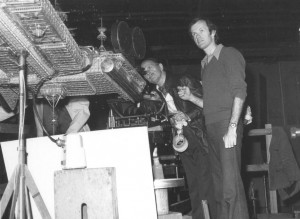 To have more information and images on Peter and Harrison Ellenshaw,  visit  the Ellenshaw official page : http://www.ellenshaw.com/