During the production and filming of the fantasy-adventure film The Dark Crystal, at Elstree Studios, Borehamwood, British visual effects supervisor Roy Field was commissioned to provide matte shots, and optical printing shots. Veteran matte painter Charles Stoneham used to work with Field. Stoneham started as a matte painter during the middle sixties at Pinewood matte department under Cliff Culley when Roy Field was a matte camera and optical effects supervisor at Pinewood.  When Roy Field opened his own effects company Optical Film Effects in the early eighties, he called Charles to supply glass and matte paintings to him very often. Stoneham painted mattes for  Roy Fields on films like Superman III(1983), Gandhi(82), Supergirl(1984),  Return to Oz (1985), and also Dark Crystal.

Charles Stoneham painting one of the matte paintings for Dark Crystal. 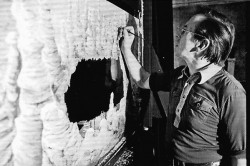 The painting showed a wide view of the Mystics village on a  rocky valley.  That matte painting was on the first cut of the film that was premiered in Washington dc, on March 19, 1982. After the negative response of the audience as they felt the narrative was too confusing to follow,  the film was cut  8 minutes and added with new English dialog and a narrator voice-over. The long-shot with a  tilt-down camera movement of that matte painting was removed. I’ve only been able to recover some images of an old and poor quality VHS recording in black and white from that matte shot by Stoneham, although it doesn´t match the painting it looks like it was also the work of him. 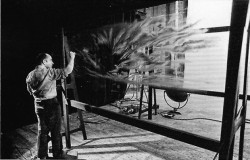 That’s Doug Ferris working on a glass painting. British visual effects artist Jon Sorensen helped me to identify the artist and told me about that trick.  First, they tried to get the skies with matte paintings and smoke effects, but they were not satisfied. Then they tried with the water tank and Sorensen was called to achieve the desired effects.

At some point in production, it was clear that many more matte paintings would be needed to provide the epic visual imagery that the film required. Especially during the journey that the young hero makes from the mystic village in search of Aughra´s place and far away to the Skeksis castle.  These matte shots were rendered by Industrial light and magic ILM,  in San Rafael, California. Mike Pangrazio and Chris Evans handled the paintings and Nel Krepela and Craig Barron managed the matte camera work.  ILM was in charge of 8 matte paintings.  As Craig Barron remembers “Gary Kurtz asked us to do a few matte paintings to help finish up the production. The plates were shot 4 perf, not VistaVision which was the format ILM was set up in. The show is an example of work we sometimes did in the matte department alone separate from the rest of ILM”

These are the ILM matte paintings for Dark Crystal. The three first paintings were by Mike Pangrazio. The three last paintings of the Mystics voyage to the Tower were by Chris Evans. 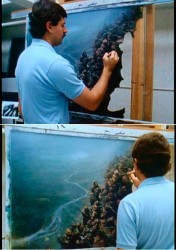 That’s Mike Pangrazio working on one of the paintings.

The three last paintings of the Mystics voyage to the Tower were by Chris Evans.

The rest of the matte painting work on The Dark Crystal was handled by Charles Stoneham.

On the last one, the matte painting was a small addition on the rocky cliffs to join Aughra´s Observatory with the set.