The information above has been compile from different sources, magazines and books, and with the help of VFX professionals like Martin Body, John Grant, Bob Cuff ,Doug Ferris, Dennis Lowe, Kent Houston,  and others  to whom I’m sincerely thankful, like matte expert Peter Cook.

1912. At the book  “The Saga of Special Effects” by Ron Fry and Pamela Fourzon, they  mention Britain’s Edgar Rogers, who worked with England’s trick film pioneer G.A. Smith, as an early developer of glass shots and other special effects.  They reference the film Santa Claus (1912) as a showcase for his effects.           .

1916. Walter Hall, the English art director of D. W. Griffith’s “Intolerance”, develops his own method of creating the glass shot. He paints the additions to the scene on composition board, cuts them out with a beveled edge,and mounts them in front of the camera. He patented this variation of the glass shot technique, known as “The Hall Process” in 1921.

1927.  For Alfred Hitchcock film “The ring” Walter Percy Day is called from France, to execute a trick shot using the “schuftan process”, to integrate the ring set, into a painting of the Albert Hall.

1927. Percy Day develops his version of the latent image technique and applies it in “Le joueur d’échecs” The Chess player. 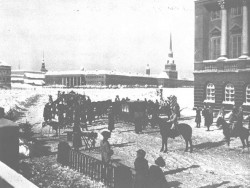 1932. Returning to England, Percy Day to demonstrate the value of glass shots, executed some paintings for free at some British Studios. Studios producers encourage their own Studios painter to made matte paintings. Although Percy Day and his assistant Peter Ellenshaw are the only two credited matte painters at that time, there were some others unknown. Percy Day and his assistant and stepson Peter Ellenshaw paint mattes for producer Alexander Korda at: The Private Life of Henry VIII.

1935. Director Alfred Hitchcock has illustrator Fortunino  Matania create a matte painting for the trap sequence at the Royal Albert Hall “The Man Who Knew Too Much.”

1936. For Alfred Hitchcock film “Sabotage”, the Strand Street of London was recreated into a Studio, with the help of a glass painting. 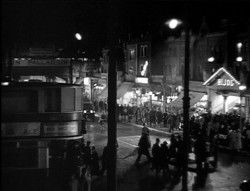 1937. For “Young and innocent” made at Gainsborough Studios, they used miniatures and matte painting. Art director Albert Jullion was probably the matte painter. Albert Whitlock worked on scenic and miniatures artist.

1940. Percy Day and assistant Peter Ellenshaw paint an oriental fantasy world for “The Thief of Bagdad” The film wins the Academy Award for Visual Effects. 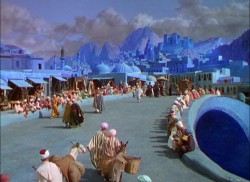 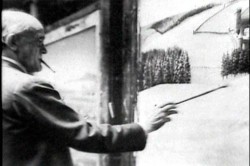 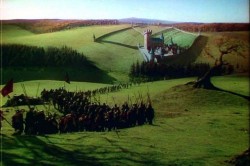 1946. After many years as a scenic artist and background painting, Albert Jullion get his first credit as a matte painter for “The magic Bow” 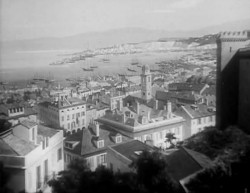 1946. Walter Percy  Day was appointed Director of Special Effects of London Films at Shepperton Studios. After returning from five years in the RAF, Peter Ellenshaw paints for  “A Matter of Life and Death”. Percy Day heads the visual effects for the film 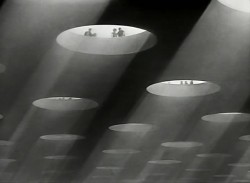 1947. Percy Day and Ellenshaw paint Himalayan views and the monastery for “Black Narcissus”. 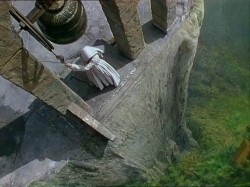 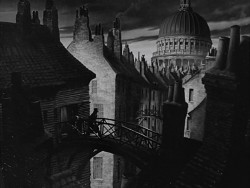 1948. Peter Ellenshaw was called to Tom Howard at British MGM Studios to make matte paintings for “Idol of Paris”.

1948. After Ellenshaw left, Percy Day started to work with other assistants like Judy Jordan who help him painting the mattes for  “Bonnie Prince Charlie”. 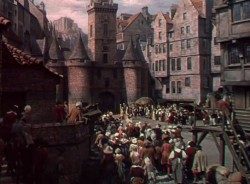 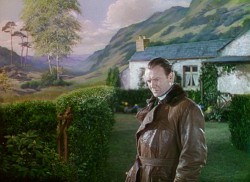 1950. Albert Whitlock is credited with Bill Warrington as Special effects for his matte paintings at “Trio” made for at Pinewood. 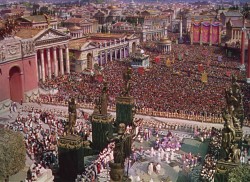 1952. Roy Field  still in his teens, entered at Bowie Films, and learned with Margutti as FX Cameramen

1952  Peter Ellenshaw  work for Disney, with  Albert Whitlock as assistant, for “Rob Roy, the Highland Rogue” and “The  Sword and the Rose”(image) They  had some matte apprentices like Cliff Culley and probably also Peter Melrose who helped Whitlock  doing foreground glasses for some films by the Arthur Rank Organization. 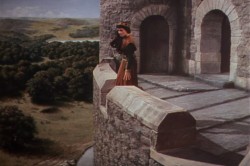 1953 . Joseph Natanson worked frequently at Rome for films like “Puccini” or “Madame Butterfly” Finally he moved to Italy. 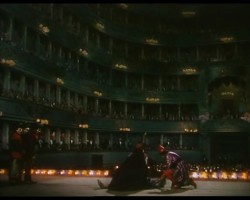 1954  Peter Ellenshaw went to America to work at Disney matte department for “20. 000 Leagues Under the Sea”Albert Whitlock moved also to the USA to work with him. 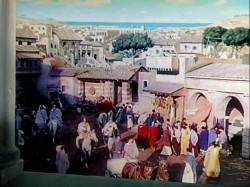 1956. For the film “Satellite in the Sky,” Wally Veevers had scenic artist Julius Kay working as a matte artist with Bob Cuff and George Samuels.

1957. Derek Meddings worked with Les Bowie as matte assist at Anglo-Scottish Pictures Ltd. They painted mattes for Hammer films like “Dracula” (image) and  “The Curse of Frankenstein” Another matte apprentice with Bowie who started at those years was Ray Caple.

1958. Tom Howard at British MGM wins an academy for the FX  at “Tom Thumb” with matte paintings probably by Judy Jordan.

1961 Shepperton Studios matte department was responsible for the mattes from some Ray Harryhausen films like “Jason and  the Argonauts”. 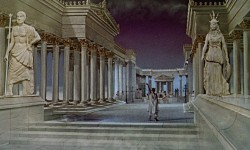 Wally Veevers was in charge of the photographic dept. Ted Samuels in charge of practicals on the floor. Peter Harman was his cameraman with Bryan Loftus, Geoff Stevenson, and  John Grant who comes from Kodak. John Mackie with Bob Cuff was about to leave to join Les Bowie. The main matte artist was Doug Ferris with Gerald Larn, Brian Evans and Peter Melrose assisting. Films from this period at Shepperton included “Vampire Killers”, “Best House in Town”, “Casino Royal”,  and many more. Not all had matte paintings as they also did transitions, Split Screens, and titles.

1962. Cliff Culley head of matte department at Pinewood, with Roy, Field supervising optical effects. Begun his James Bond series, painting mattes for  “Dr. No” and “From Russia with love”

1963. Bob Cuff began working with Les Bowie. Ray Caple was already working as Les Bowie’s matte artist and had been trained by him from an early age. They share matte work for films like “The Masque of the red death”

1964. Ivor Beddoes working as a freelance, painted mattes for Bill Warrington at “The long ships”.

1964. Peter Melrose and Bob Cuff paint mattes for Hammer film “Dracula has risen from the Grave”

1967 John Mackey, Les Bowie and Bob Cuff formed  Abacus Productions to make T.V. commercials.  (Les  Bowie didn´t want to be involved with commercials and acted as a sleeping partner, renting his premises and equipment to the  offshoot company).

1968- Abacus were invited by Carl Foreman and his designer Geoffrey Drake to carry out painted mattes and other works for  “McKenna’s Gold”. The painting was shared between Ray Caple, Bob Cuff, Lynette Lee,  and Joy Seddon, who joined Abacus as a matte artist, having previously been working with Stanley Kubrick on 2001. They also did various model shots and some pickups,  employing a fair number of technicians, including Brian Loftus, Brian Johnson, and others. Bob´s son Paul Cuff worked as Matte Process cameraman and married Joy Seddon, now Joy Cuff.

1968. At Pinewood studios, Cliff Culley and Roy Field were responsible for  the matte paintings on “Chitty Chitty Bang Bang”

1968 . Douglas Adamson was employed as a matte painter at MGM British Studios. He painted mattes for “Where eagles dare” 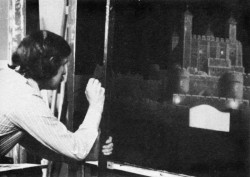 1969 . Ray Caple was responsible for mattes at  “The Battle of Britain”.   Martin Body assisted Caple as a matte camera.

1973- After 11 years at Shepperton matte department, Gerald Larn left his film work when the Studios closed.

1975. Cliff Culley left  Pinewood, and create his own company Westbury Design and Optical. He provides mattes for”The pink panther strikes again”. He was assisted by Steve Archer who later became a stopmotion animator for films like “Neverending story” (84) or “Krull” (83)

1975. For the film ” The man who would be king”  Wally Weevers and Shepperton matte department executed many matte paintings. Most of them by Doug Ferris with John Grant as a matte camera. Scenic artist Peter Wood was commissioned to paint this cave matte shot for the film. Albert Whitlock was responsible for the matte shot of the Holy city.

.1976. Shepperton reopens and Wally Veevers hires new premises just across from M stage. Doug Ferris and Peter Harman join him. They work at “The Prince and the pauper”

1978.  Cliff Culley hired Leigh Took as matte painter assistant for “Warlord of Atlantis” and other films.

1979. For the film “Raise the Titanic”  scenic artist Bob Spencer executed some cut out paintings for Wally Veevers.

Doug Ferris with one of his paintings for “Santa Claus”

1984. Cliff Culley provides mattes and optical effects for TV miniseries  “The Last Days of Pompeii” with his company “Westbury design and opticals” with Leigh Took as a matte artist. (image)

1984. Albert Whitlock retired as head of Matte department at Universal after painting mattes for “Greystoke: The Legend of Tarzan”.He remains working as a matte consultant for “Illusion arts”

1985. “Return to OZ”  filmed at Elstree Studios with veteran Charles Stoneham as a matte artist. Additional matte paintings were done at the USA. by Disney EFX. The matte camera was Peter Hammond with Stanley Sayer as matte photography consultant. Keith Holland worked with Zoran Perisic as matte cameraman, combining claymation done by Will Vinton & live action.

1985. Charles Stoneham became disillusioned with the increasing pressures of the industry and retired after his work at “Return to Oz” and “A Christmas Carrol” (image) 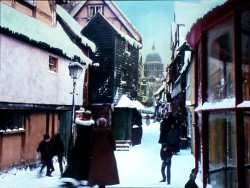 1985. Ray Caple was responsible for the matte paintings at “Spies like us”

1986. Joseph Natanson retired after his last painting work at “The name of the rose”. Since the early 60´s he lived and worked at Rome painting mattes for more than 80 films. 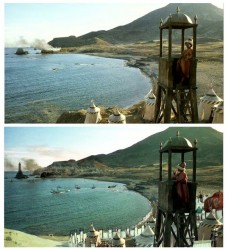 1989. After painting mattes for “Eric the Viking” with Doug Ferris, Bob and Joy Cuff retired from matte painting.

1990. Peter Ellenshaw made his last contribution to film  industry assisting his son Harrison painting the mattes for “Dick Tracy”

1990. Steve Beggs, after some years working on miniatures, paints mattes for “Hardware” at Cliff Culley’s company “Westbury design and opticals”

1990. After his work on “Treasure Island ”  Ray Caple died from an illness. 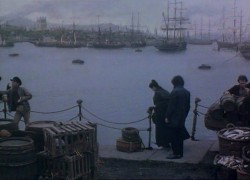 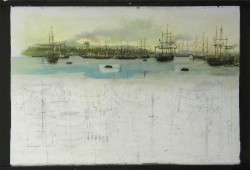 1995. After decades working as a scenic artist,  Brian Bishop also contributed painting mattes and foreground glasses. He worked very often with Derek Meddings, for “Goldeneye” he executed a glass painting. Meddings on the picture with Brian´s painting.

1997. Doug Ferris again for Magic camera Company painted the city of Calcuta for “City of Joy”. 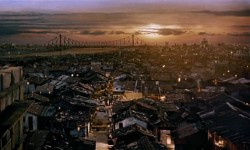 1997 . Doug Ferris painting, and John Grant camera,  for “Seven Years in Tibet”.Doug Ferris retired, John Grant continued to work and retrained on computers until the company relocated to central London and retired in 2002. 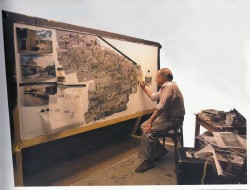 2001.  Steve Mitchell, a scenic artist who was trained under Brian Bishop, executes a traditional painting on hardboard, latter photograph, and composite digitally for films and TV series like “Band of brothers”.Only the hide and soldiers are real the rest is oil painting on hardboard by Mitchell. 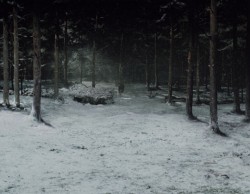 2004. Steve Mitchell executed a glass painting for the film “The life and death of Peter Sellers”. 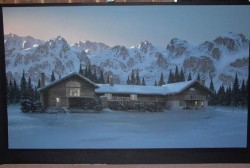 2017. Leigh Took  was  called to make an old school glass painting on location  for the film “Their Finest”