McCune started on film business when he and Bill Shourt were hired in 1975 to work under veteran FX creator Robert Mattey on creating the iconic shark in the movie Jaws.
He was subsequently hired to work on the Star Wars as chief model maker. He then moved with John Dystra to work at Apogee, Inc. on films like Star Trek : the motion picture, Firefox, Lifeforce, Never Say Never Again, Space balls and Caddyshack.
Around early 90´s he founded own firm, “Grant McCune Design” which was hired to work on such movies as Speed, Batman forever, Daylight, or Sphere.
He died at his home of pancreatic cancer at the age of 67 on December 27, 2010. 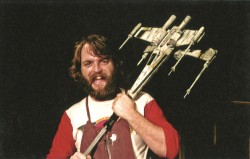 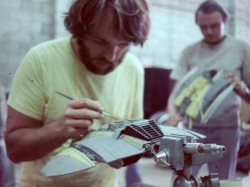