He started at  the Cinecittà  Studios in Rome hired as “scenic artist”. And at Cinecitta Italo it remains as an employee until 1964, when he presents his resignation, but he continues to work there, as a freelancer, until 1985.During 50 years  of working at film business (1935/1985) he collaborated on about 400 films.

Hundreds of meters of painted backdrops. and  silhouettes, painted on a variety of materials, reproducing many different objects.

Some examples: the silhouette of the famous liner “Rex” for the film “Amarcord” by Federico Fellini who was the size of 85 x 20 meters – The copy of the slightly smaller of the real Colosseum for the film  Rome of F. Fellini. For only the film “Faust”, directed by De Cuir in 1966, he painted two enormous depths of 80 meters in length by 18 in height each)

In 1985, due to some heart disease, he decides to leave his cinematographic activity and exclusively dedicates himself to painting.

Maybe age (he was 75), perhaps being away from the studios and from the phantasmagorical world of cinema, leads him to an exasperated accentuation of his expressiveness. A whole series of hyper-realistic watercolors arise. The scrupulous care of details, the exaggerated employment of colors too bright, produce in those last works the effect of a cinematographic reality. 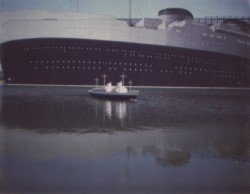 Colosseum built in Cinecittá Studios for the Fellini´s film Rome. 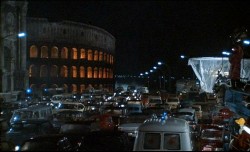 Italo with the scenic paintings made for Ben Hur (1959) 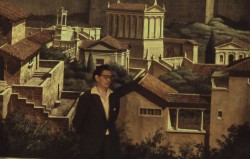 Appreciation letter from George Gibson head of scenic department at MGM for his work on Ben-Hur. 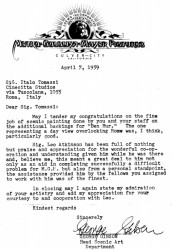