For over 30 years I have divided my career between the fine arts and the film industry.  I have exhibited in galleries and museums across the United States; most notably the Corcoran Gallery of Art in Washington, DC; The Alternative Museum, NYC; The Southeastern Center for Contemporary Art, Winston-Salem, North Carolina; a one-person show at  the Riverside Museum of Art Riverside CA in conjunction with my mural commission for the Riverside Hall of Justice (1992); the Directors Guild of American, Los Angeles, CA;  and most recently the  Katzen Art Center at American University, Washington, DC. I have received several grants and fellowships for my work including a National Endowment for the Arts Fellowship in Painting.

In film I have contributed as a matte painter to such movies as Cliffhangers, Dante’s Peak, Titanic, Matrix Revolution, AI, and What Dreams May Come. From 1997 to 2001 I was an artist for Steven Spielberg’s company Dreamworks.

Visit his web site for more information and samples of his paintings. 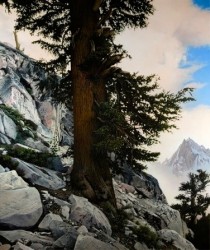 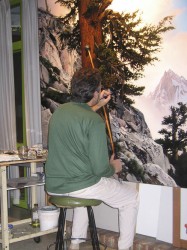 Alan Sonneman and Michelle Moen working on a painting from Cliffhanger with  matte camera Alan Harding. 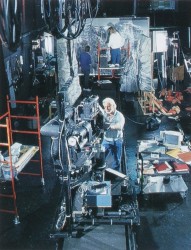 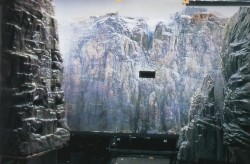