Steve Burg was born on the east coast and was raised in the woodland suburbs of northern New Jersey. Intent on a career in the field of Visual Effects, he attended the Film Graphics and Animation program at the California Institute of the Arts. He began his career as a visual effects animator, branching out into miniature construction, photographic effects and matte painting on films such as “Dreamscape”, “Buckaroo Banzai” and “Beetlejuice”.

Burg segued into the design field following an introduction to director Stuart Gordon, who hired him as a Conceptual Artist on “Robot Jox”. There he worked closely with Ron Cobb, who soon became a de facto mentor. Cobb hired Burg as a Conceptual Artist on George Cosmatose’s “Leviathan” and James Cameron’s underwater epic, “The Abyss”. Burg went on to furnish designs and storyboards for several of Cameron’s subsequent projects (“Burning Chrome”, Terminator 2″, “T2-3D”), while branching out to work on Paul Verhoeven’s “Total Recall” and “Starship Troopers”, Kevin Costner’s “Dances With Wolves” and “Waterworld”, Robert Zemeckis’s “Contact” and numerous other film and television productions. He is now well established as a versatile designer/illustrator with a thorough knowledge of film production and visual effects methodologies.

Self-taught in traditional illustration, Burg has embraced the medium of 3D computer graphics as an ideal confluence of his varied interests in art and design, model making, animation, lighting, photography, and visual storytelling. He lives on a quiet tree lined street in Pasadena, California, and strives to maintain his personal development as an artist in addition to his ongoing work in the motion picture industry. 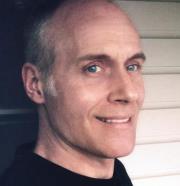 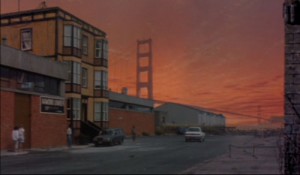 Jim Aupperle was responsible for matte photography on this painting by Steve Burg.
“The film was supposed to take place in San Francisco but was photographed in a studio outside Rome.  Steve Burg painted the Golden Gate Bridge to a wide establishing view down a street.”