born December 5th, 1941
He worked as an uncredited model-maker on Thunderbirds season 1 and 2. Smithies later worked in the model workshop on the feature film Thunderbird 6.Throughout his career, Smithies created models and miniature effects for major feature films including Superman, Dune, Aliens, Harry Potter and the Sorcerer’s Stone, and several James Bond films. He worked with The Jim Henson Company on The Neverending Story III in 1994, and continues to create and consult on special effects in the film industry.

A young Brian Smithies working on  a model from Thunberdirds. 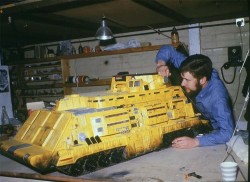