That technique is a variation of glass shot. Instead of painting on a sheet of glass, the painted element is cut out as a silhouette on a thin wood or aluminium surface and placed close to the camera.  The advantage over the glass shot is that you get ride of the reflection problems, and make it easier for the transportation and settle of the painting.

Walter Hall, the art director of D. W. Griffith’s Intolerance, was probably the first one to use this technique. He painted the additions to the scene on composition board, cuts them out with a beveled edge, and mounted them in front of the camera. He patented this variation of the glass shot technique, known as “The Hall Process” in 1921.

This technique was soon abandoned in favour of glass shots and foreground miniatures. Almost forgotten, there are very few documented cases of its use in American and British Film industry.

Spanish art director Enrique Alarcón  made use of all kind of perspective tricks during his early years at the 40´s and 50´s. Apart of glass shots, and hanging miniatures , he also experiment with photographic enlargement glued on a glass and also on cut out wood surface. Scenic and glass painter Emilio Ruiz worked many times with Alarcon and probably witnesses some of those tricks. It was during the production of the film Cruz de Mayo 1954 when he used for the first time the cut out method. The art department had already built the first floor of some buildings for a cityscape shot. They got a sheet of glass with the painting but the day of the shooting the glass got broken and Emilio needed a fast replacement, so they cut out the shape of the painting buildings on a fine wood plate and he painted the cityscape.

Later on he replaced the wood by a fine aluminium sheet and became an expert in the use of this technique. He worked very often on  Italian’s  Sword and sandal films, and on American and British movies filmed in Spain.

For the film The golden voyage of Sinbad (1974) Dir: Gordon Hessler Emilio Ruiz executed some foreground miniatures on cut out aluminium.  Emilio and Ray Harryhausen with one of the paintings. 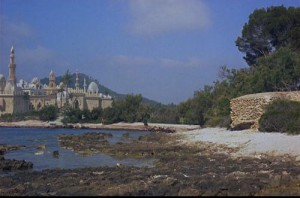 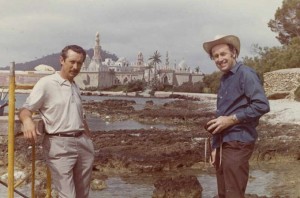 Some other samples of Emilio Ruiz cut out paintings.

These are two behind the scene pictures of a cut out painted boat suspended with horizontal wires. At the first image, the camera was not in position, so the boat looks like flying.  On the second picture we see the poles supporting an invisible wire which keeps the boat at the horizon line. The movie is Mystery on Monster Island (1980) Directed by Juan Piquer. 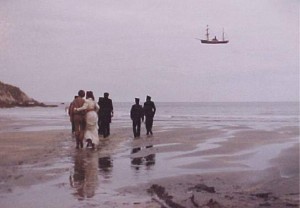 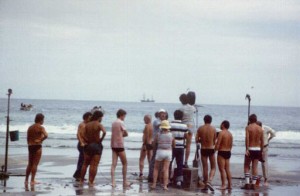 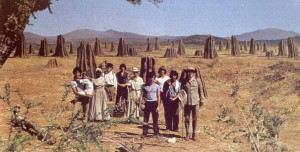 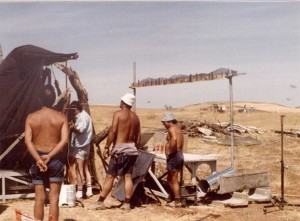 Emilio Ruiz worked very often on Italian films, and collaborated with director Enzo Castellari on many of his movies. Castellari with sunglasses in front of an Emilio’s paintings for the film The Loves and Times of Scaramouch (1975) 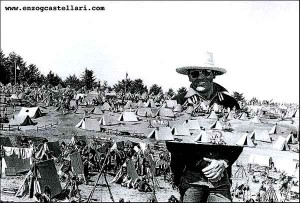 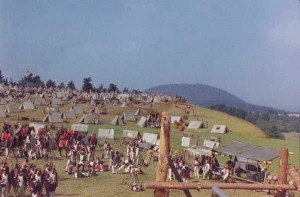 Another Spanish artist that used this cut out technique is Julian Martin. He worked as scenic artist for many decades and witnesses Emilio Ruiz several times. He started to paint also foreground miniatures using also thin aluminium.  Ceiling painting on cut out by Julian Martin for the film La hora de los valientes (1989) 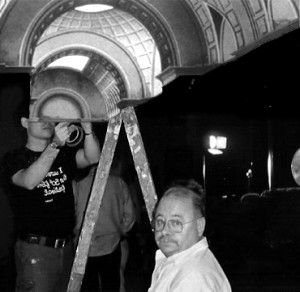 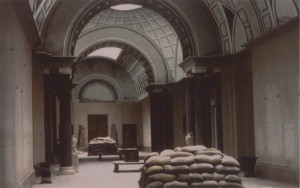 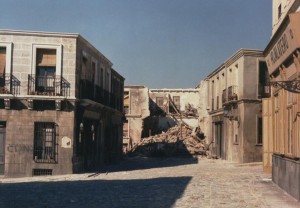 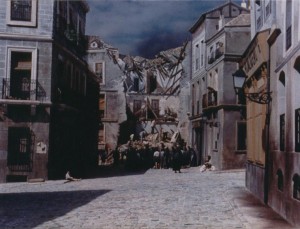 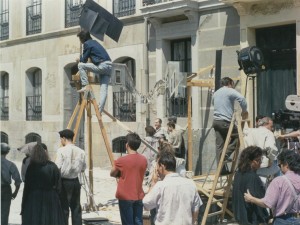 There must be some American or British films using that technique, but I just Know of some samples.

As far as I know, Jim Danforth, stop motion animation master and brilliant matte artist, made use of that technique for the film Equinox (1970). Danforth with the painting cut out on a hardboard. 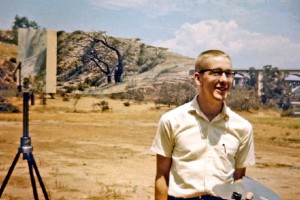 The matte artists himself tells how it was done: The director had worked with a Spanish matte painter who used this approach to doing live-on-location matte paintings rather than the traditional glass because this approach shortcut any risk of exposing the reflection of the camera in the scene. I would make a sketch on a sheet of paper that was glued to the aluminum sheet.  I then used saws and files to shape the aluminum before painting it.  In order to create the sketch in the correct size I needed to calculate the position of the camera relative to the background elements that needed to be changed, calculate the depth of field based on the lens to be used for the shot so that I could figure out where to place the matte painting, and create a scale for the painting from the result of those calculations.  To put it mildly, this technique was complicated and no one else in town wanted to deal with it. That’s how I got my start, taking a job no one else wanted.  All of the paintings worked well enough.