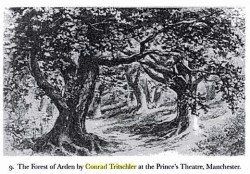 Mr Tritsçhler went to United States of America to work for Richard Walton Tully productions on films like  Trilby (1923) and Flowing Gold (1924)  where  he painted sets and backdrops. 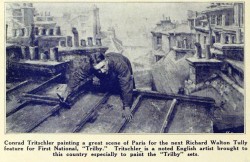 Sometime during the late twenties and early thirties he went to work for Howard Anderson Company to make glass and matte paintings.

Working for Anderson, Conrad Tritschler was responsible for White Zombie’: glass paintings, such as the exterior and upper interior of Legendre’s castle. In an interview,  director Victor Halperin once described the combined technical processes of Anderson and Tritschler: “We had sets built up to a certain height  maybe 25-30 feet high, and they worked in and ﬁted in paintings to ﬁnish the rest of the interior of the castle where much of the main action took place. You couldn’t tell one part from another. It looked like all interior stone. Individuals walked in the front when they were searching for the castle, and they’d see the castle off in the distance on top of a huge rock, and that was all painted. We saw the individuals move and the waves of the sea in the foreground, so we could combine them in the same camera shot.”