Carlo with his creature. 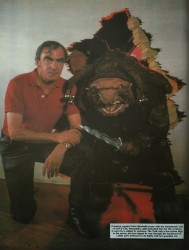 For achiving the desired effect they buil oversized set. Director Lewis teague explained why. “Even though extraordinary things have been done with opticals in the recent years they are usually identifiable; audiences are usually sophisticated enough to spot them. In a total fantasy film, you can accept opticals; in Return of the Jedi you know there are opticals so if you identify a particular shot as a process shot, you’ll accept it. But Cat’s Eye, which is a fantasy in a contemporary, realistic setting, I tried to make all the effects as realistic as possible. So I’m avoiding blue-screens and matte shots like the plague.” 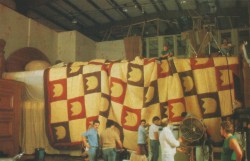 For the second segment they used foreground miniatures with Emilio Ruiz del Rio. 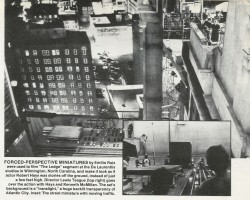 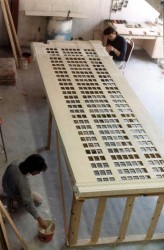