Cliff Culley,  was one of the backroom boys at Rank in Pinewood Studios on all of those shows from the Harryhausen’s and Carry On’s to the Norman Wisdom cheapies and whatever else was being done at Pinewood.  He started at Pinewood special effects department in 1946, under Bill Warrington as head of the department. At that time it was Les Bowie chief of matte painting, and later on,  when he left, Albert Whitlock worked from 1949 to 1953 at Pinewood matte department.
He worked under Peter Ellenshaw and Albert Whitlock for Disney films like “Sword and the Rose”(1953)
Culley became a matte painting specialist and worked on loads of films over the years,  and became head of Pinewood’s matte painting department in the mid-late 1960s. He also has provided many optical gags on films too, for example, the reflection of thug in the eye of the beautiful girl from the opening of Goldfinger.

Cliff Culley is best known for supervising the matte art on films such as the Brocolli’s You Only Live Twice and On Her Majesty’s Secret Service and Chitty Chitty Bang Bang, the latter film is one of his sole supervisory screen credits next to One of Our Dinosaurs is Missing and Spaceman in King Arthur’s Court for Disney, and Hellraiser 2. During the 60´s Culley took Charles Stoneham as matte painter assistant at Pinewood matte department

Since leaving Rank  in the mid 70s Cliff Culley opened his own firm, Westbury Design and Optical  which provided overspill latent image comps and optical tricks on films such as “Hellraiser II”, or “Sword of the valiant” (1984). He got Leigh Took as a matte assistant in 1978 for films as “Warlords of Atlantis” or “Clash of the Titans”.

Cliff Culley and Roy Filed setting up a matte shot for Chitty Chitty Bang Bang (1968) at the Pinewood Matte Department. 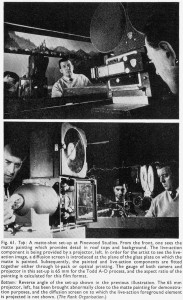 Those photos (courtesy of Ed Maggiani), were taken at Pinewood Studios in February of 1996.
Cliff Culley very kindly showed some of the many glass paintings he had done, to Production designer Syd Cain and writer journalist Gary Giblin (To whom I sincerely tank to send my those pictures)

1. From Left to right: Syd Cain, Gary Giblin and Cliff Culley in front of a painting from Nightbreed. 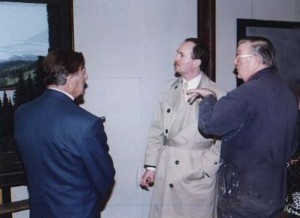 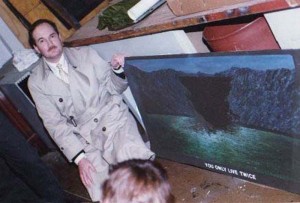 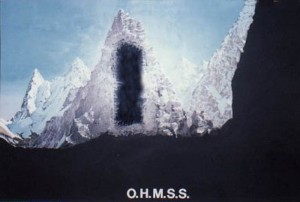