Gillespie joined MGM as a set designer in 1925, a year after it was founded. He was educated at Columbia University and the Arts Students League. His first project was the silent film Ben-Hur, released that same year. He worked at the studio in various capacities until 1962. In 1936, he became the head of MGM’s Special Effects Department.[2] Gillispie’s nickname was “Buddy.”

Arnold Gillespie made use of a hanging miniature to recreate the Roman Circus for the silent version of Ben-Hur. (1925) 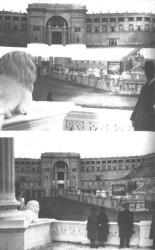 A huge miniature of “Jerusalem” hold up behind full scale set to achieve a perspective effect. 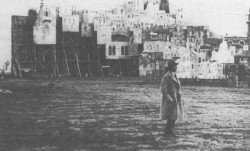 Arnold Gillespie into the tank at MGM effects department, ready to shoot ” The Wreck of the Mary Deare” (1959) 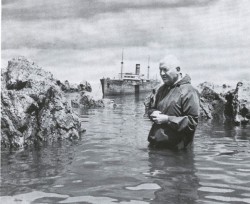 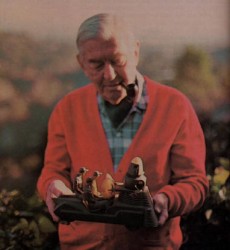