I originally started at the BBC, where we were expected to do glass paintings as well as scenic work, as opposed to the states where they were separate skills. As a point of interest I was the first person to do a digital matte in this country. My brother in law lent me his Mac with photoshop on it and I suddenly realised that you could get an exact colour match to any image and that you could paste parts of one image over another and then work them together. I was working with The Mill occasionally on adverts using the old system and when the next advert came up I convinced them to give me one frame of the shot on a floppy disc, (shows how long ago this was), and did the matte on the Mac. No problems with lighting, no locking off of cameras for hours or days, they could just shoot and hand it over to post. What I found out later was that Industrial Light and Magic had done it 3 months previously, so they were first but we weren’t aware of that at the time. The last film I did was Snow White and the Huntsman, then I was forced to retire due to lung problems, too much spraying. 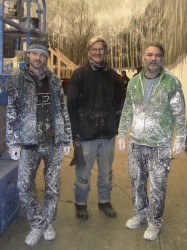