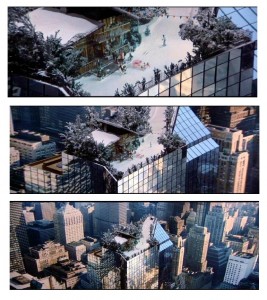 Matte painting extensions were used for aerial shots of the chemical plant to add scope.

The frozen lake were achieved using a painted glass matte.

Matte painted mountains over a background plate filmed in Italy were married with cloudy water tank footage shot by Roy Field that was double printed onto the plate to create a tornado long shot.

For the locked off shot of Superman ramming into the ship, the live action was filmed on a partially complete mock-up at Pinewood, a matte painting was used to enhance the scene

Matte painting were used to show the power cut on American Continent.

Power cut effect on the City.