Leon R. Harris was a production illustrator on Lingwood G. Dunn VFX company Film Effects of Hollywood, working on films like West Side Story (1961) and The Sound of Music(1965) or The Great Race (1965) He occasionally collaborated at the matte painting team.

During the seventies besides his illustration assignments, he started to work as an art director.
He shared an Academy Award nomination for his work on Star Trek: The Motion Picture along with production designer Harold Michelson, set decorator Linda DeScenna and art directors Joe Jennings and John Vallone. Harris and Michelson also worked together on the 1990 film Dick Tracy, with Harris working as a matte layout illustrator and Michelson as art director.

He also worked frequently with production designer Albert Brenner. Leon designed and hand-painted the Matte Paintings in collaboration with production designer Albert Brenner’s New York Street on the Paramount Backlot at 5555 Melrose in Los Angeles. Leon painted beautiful ‘grey scale’ studies for backlot matte work.
He painted the mattes for backgrounds at the end of each street

Leon Harris (at left) working on a huge glass painting  with David Mattingly and Peter Ellenshaw for the film Dick Tracy. 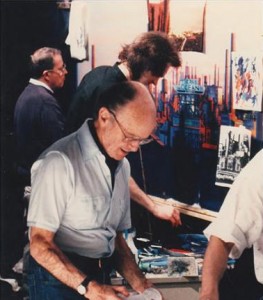