Born in London, he began working in the motion picture industry at age 14 in 1929.
“Because of the depression, l quit school and went to work to help out the family. lt was just good fortune,” he remembers. “that l had a relative in the industry who helped me get a job.
“l was the ‘boy’ in the studio, you see. Someone shouted, ‘Boy!’ and I came running. I made l5 shillings a week as the fetch-and-carry fellow at London’s Gaumont Lime Grove Studio before the British took it over.
“My career was a progression from working in a warehouse to helping carpenters. Then miniature makers, then painting signs for sets and getting into titles, then back to miniatures and ﬁnally into matte work.
Whitlock vividly remembers one of his ﬁrst assignments painting all the signs for Alfred Hitchcock´s The39 Step when he was only I9. If pressed, he can even tell a tale or two about assisting the miniatures supervisor on Hitchcock’s ﬁrst version of The Man Who Knew Too Much, which came even earlier.
My first matte was made during the war with a turkey called Bad Lord Byron; the man who was originally doing the mattes went on to an art director’s job leaving the post vacant. I was a scene painter at the time, so they said l was the most
obvious person for the job. It was a black and white film, my ﬁrst color film didn’t come along until around I950 with a picture called The Seekers, which was made at Pinewood.”

Whitlock had been working with the Wall Disney unit during those last years in England and at the urging of Peter Ellenshaw thought there would he something for him at the U.S. Disney studios,

“lt was about I954 that l got up enough courage to pack up the wife and kids to come to Hollywood. The Mecca of the movie business. It wasn’t an easy decision. I was in a very good position, I had worked for over 20 years with Gaumont British, which became the Rank Studios and then ﬁve years at Pinewood; I could have eventually retired from Pinewood with a comfortable pension.”

After a few weeks of ﬁnding little work, Whitlock decided to return to England. Just before he was scheduled to depart, Walt Disney Studios phoned and offered him a job. His ﬁrst assignment was to design the titles for 20.000Leagues Under the Sea. From I954 until I961 Whitlock worked on most of Disney’s motion pictures. He was involved with some of the basic concepts at Disneyland and himself painted the Main Street Theater at the world-famous amusement park. ln l96l Whitlock went to Universal Studios where he renewed his acquaintance with Alfred Hitchcock. Whitlock painted the mattes for that masters last six ﬁlms, The Birds, Marnie, Torn Curtain, Topaz. Frenzy, and Family Plot.
Whitlock refers often to the special eﬂects team he organized at Universal.
lt includes first cameraman Bill Taylor, assistant matte artist Syd Dutton, camera operator Dennis Glouner, assistant cameraman Mike Moramarco, camera loader Mark Whitlock, rotoscope artist Susan Rodgers, and key grip Larry Shuler and his assistant Henry Schoessler. Whitlock earned Academy
Awards for Special Visual Effects for “EARTHQUAKE” and “THE H|NDENBURG.”
He retired from Universal Studios at 1984. But continued working on occasional productions for a few more years.
He passed away 26 Octuber 1999 by Parkinson’s disease at age 84‘ 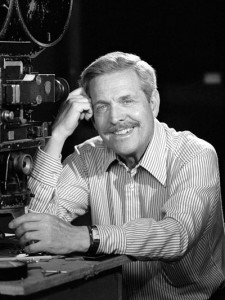 A young Albert Whitlock with an unidentified painting, probably from his British period. 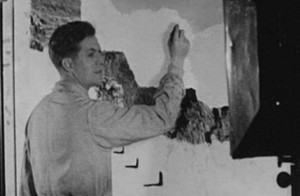 Al Whitlock with a painting from the film Mame. 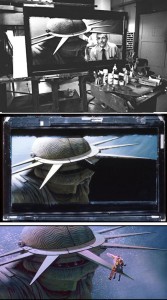 Working on a painting for Earthquake. 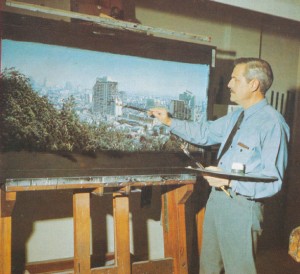 Albert Whitlock on his office at Universal  matte department with the painting he made for The man who would be king. 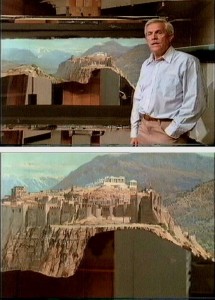 Whitlock with one of the paintings for Dune. 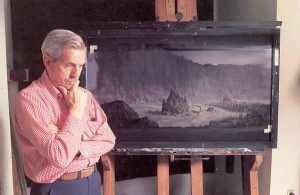 Full gallery is not available yet, but you can visit the old site: