Ever since I was eight years old I knew that I wanted to be involved with animation and visual effects. In 1968 I landed my first professional film job working for CLOKEY PRODUCTIONS on GUMBY and DAVEY & GOLIATH. A couple of years later I was hired by one of my heros in the industry, Gene Warren Sr. of PROJECT UNLIMITED and EXCELSIOR fame. Gene was my mentor for 7 years where I learned much about stop motion animation and visual effects. From EXCELSIOR I moved on to such places as CASCADE PICTURES, COAST EFFECTS, EFFECTS ASSOCIATES (Jim Danforth), DAVID STIPES PRODUCTIONS, ILM, TIPPETT STUDIO, SKELLINGTON PRODUCTIONS, DREAM QUEST IMAGES, SONY PICTURES IMAGEWORKS, etc. I specialized in character animation, although I was also heavily involved in other areas of visual effects such as optical compositing, matte painting and compositing, plate photography, lighting and setup, stop motion puppet fabrication, etc. I have been fortunate to have worked with some of the best in this industry. In 1995 I was forced to make the transition into digital animation and visual effects. I sure do miss those days of working with cameras, projectors, puppets, miniatures, sets and lights.

Those are 5 photos of a matte painting that I did in 1980 for the movie HOPSCOTCH, starring Walter Matthau. The painting was done with oil paints on a sheet of glass. I did the composite with rear projection using my RKO matte projector when I was at CPC Associates in Hollywood. I used an anamorphic “squeezed” plate, so I had to paint with a 2:1 squeeze. Anamorpic projection lenses were not as sharp as spherical lenses. Jim Danforth devised this geometric graph which allowed me to accurately paint the geometric shapes with a 2:1 squeeze.
The reason for this matte shot was it was cheaper for the production to shoot in Atlanta, Georgia and pay for a matte shot to make it look like Washington, D.C.
Finished unsqueezed composite. 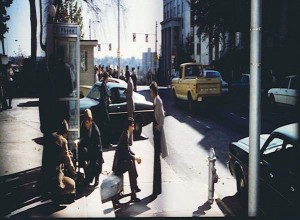 bg. plate with the matte for the painting area. 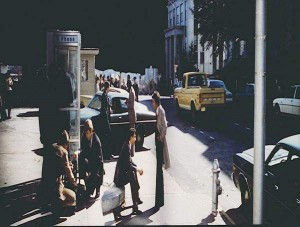 Harry Walton working on the painting. 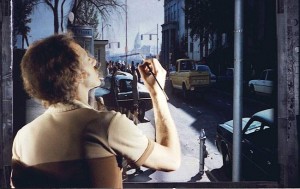 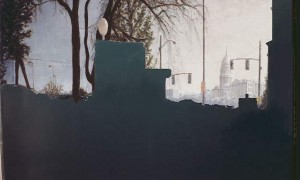