Son of matte painter Albert Whitlock, Mark started to work as a matte assistant during the late 70´S at Universal matte department helping his father and Syd Dutton. He worked at  Dutton and Bill Taylor company Illusion Arts as a matte artist during the 80´s. He latter went to collaborate with some other VFX houses as matte painter and retired at early 90´s from film business.
Mark Whitlock on Location, during his time working at Illusion Arts. 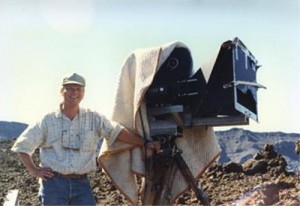