Ellis “Bud” Thackery was an American cinematographer and FX artist.
In 1923, the family came to Hollywood, where Bud entered Manual Arts High School, and where he also got his first job. Bud was hired as a messenger boy at the old Warner Bros. Sunset Boulevard Studios.

In time, the studio told young Thackery that he could be promoted to become assistant to the “glass artist”- the man who painted and set up matte shots- if he would work during the day, and go to school at night. Bud accepted just in time to become the glass artist assigned to working on the original Desert Song. This film, shot on location near what would become the site of the film Beau Geste, was the first feature ever made on panchromatic film. 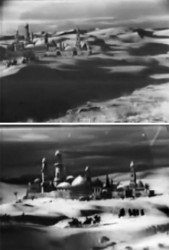 Starting as a “glass artist” Bud did much of the trick and special effects photography for such early vintage serials as Darkest Africa, Undersea Kingdom, The Vigilantes are Coming, Dick Tracy, Zorro Rides Again, The Lone Ranger, King of the Royal Mounted, Adventures of Captain Marvel, and others. Later, he stepped behind the camera to direct photography for such serial thrillers as King of the Mounties, G-Men vs. the Black Dragon, Dare Devils of the West, The Tiger Woman, Haunted Harbor, The Purple Monster Strikes, The Phantom Rider, The Crimson Ghost and many more.

Bud’s experience came hard, but quick. He first got behind the camera in 1927, when they taught him how to make matte shots. He was on location with Daryl Zanuck making Noah’s Ark, when the impresario noticed that young Thackery wasn’t working all the time. Zanuck quickly took care of the youngster’s spare time by assigning him to second unit camera when he wasn’t working on glass or shooting mattes.

Thackery joined the International Photographers Guild in 1928 and stayed at Warner Bros. long enough to work on some of the first sound films.

He was nominated for an Oscar along with Howard Lydecker, William Bradford and Herbert Norsch in 1941 for Best Effects, Special Effects in the film Women in War.

To read the full article: