Emil Kosa Sr. was born in Czechoslovakia in 1876. Kosa worked with his father making marionettes for his theater. He moved to Paris to work as an assistant to his longtime friend and renowned Czech painter Alphonse Mucha. In Paris he met his first wife, Jeanne Mares Kosa, a French pianist at the Paris opera who gave birth to his first son Emil Kosa Jr. in 1903. Three years later she died of tuberculosis.

By 1924 he had settled in Los Angeles with his son, who was following in his father’s foot steps in becoming a great painter.
Kosa Sr worked at T. C. Fox matte painting department under Fred Sersen. 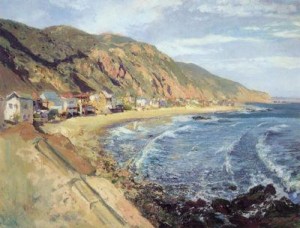