He started workin as matte painter for Jim Danforth Effects Associates doing matte painting for film and Tv series like Bringém back alive (1983)
“Getting to work as an assistant to Jim Danforth in the early 1980s was an incredible opportunity and learning experience. Later, I was able to work with some great people like David Stipes, Bob Bailey, Harry Walton, Steve, Charley and Edward Chiodo”
“The California visual effects industry was still small in the early to mid 1980s. I got the sense that almost everyone knew each other. Rocco knew Jim Danforth, and I met him when he paid a visit to Jim’s shop once. About the time I finished the work with David Stipes, I got a call from Rocco to work at Dream Quest, to help with BUCKAROO BANZAI and some television projects”

“I was very fortunate to get to work with Rocco Gioffre at a (now defunct) film effects company called DreamQuest, for a few years. Another fond memory is visiting the Universal matte department, in the mid 1980s. Syd Dutton very graciously spent an afternoon showing Rooco Gioffre and I all of the fantastic work he and Albert Whitlock had created there for many years. That was inspiring”

“Around early fall of 1988, I received a call from Scott Ross, ILM’s general manager. Except for some of the camera people, most of the matte department personnel had departed ILM that summer, for various reasons. I think it may have been one of those things where each person had his or her own reason for moving on to something else, but the fact that all were leaving at the same time probably cast an ominous tone that really wasn’t there”

“Around 1988 or ‘89, I recall John Knoll bringing in (to ILM) some impressive samples of photo retouches he had done with his Photoshop program. That was maybe a year or two before it was released commercially”

Mark Sullivan working on a fantasy landscape painting for “Hook”. 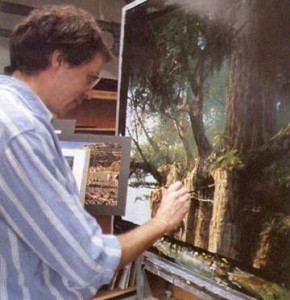 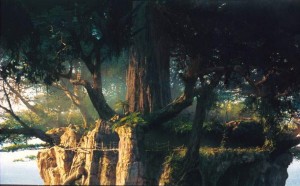 Painting an interior view of a warehouse for “The Hudsucker Proxy” 1994. 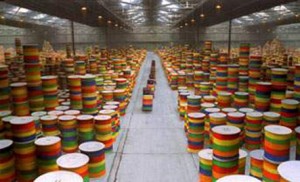 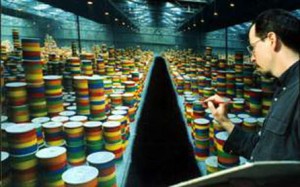 Mark Sullivan at work on a painting- part of a giant rendering six feet tall and nineteen feet wide- that would eventually become the sprawling backdrop for the Rocketeer´s passage over the city. The movie was “The Rocketeer” 1991. 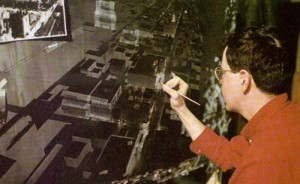