Emilio Ruiz del Río, was born in Madrid, Spain in 1923.
In 1942 he started to work at Chamartin Studios in Madrid as assistant of scenic painter  Enrique Salvá, a well-known landscape painter, who became scenic artist and later on art director.

For the next few years Enrique Salvá and his young assistant shared the work painting scenic backdrops and glass paintings. At the 40´s they worked at more than 10 films by year, it was an exciting, wild and crazy experience painting always under pressure, always running from one to another studio. Salvá was the fastest and most wanted background painter, and Emilio was forced to learn fast, how to paint bakings and glasses.

It was in 1955 during the filming of “La cruz de Mayo” when Emilio discovered a new system. He had just completed a painting of a cityscape on a huge sheet of glass. When Emilio arrived to the studio at the morning, he found the glass cracked. Probably caused by the extreme cold during the night. They did not have time to prepare a new glass, so Emilio asked the construction team to help him cut a wooden silhouette of the city. He then painted the required scenic effect over the masonite surface. The shot was a huge success and Emilio immediately saw the advantages of using the painted cut out rather than the old glass shot. There wasn’t the problem of unwanted reflections showing up on the sheet of glass, and it was more easily set up and lighter to handle. Emilio thought about some other material lighter than the wood and finally came up with the idea of using a thin aluminium cut out piece. From then on, depending on the requirements of the production he used both techniques, glass and aluminium cut out, the last one more often mostly because was a cheaper and easy to handle one.

When the Italian producer Italo Zingarelli came to Spain to supervise the exterior shooting of his films at thge late 50´s , he saw one of Emilio’s on location paintings and became aware of the extremely useful he could be for his next epic projects. During a decade, Emilio Ruiz worked with him  travelling for Europe, painting miniatures in Italy, Yugoslavia, Hungry, etc, for sword and sandal and war movies like “The Last Days of Pompeii” (1959), “Legions of the Nile” (1960), “The Colossus of Rhodes” (1961) or “The Invincible Seven” (1963).
These were years of fast painting and learning by doing hundreds of in camera trick shots. He began to explore new ways to give realism and movement to some of his paintings. He started to make armies of small soldiers silhouettes glued over hidden belts, moved by a crank. For a Roman Circus shot, he included hundreds of small rubber figures in a cut out painting, moved along with hidden wires. He also provided armies and vehicles moving through miniatures and squadrons of airplanes painted on a moving sheet of glass, for war movies.

Emilio’s filmography was full of international names like Mann, Lean, Cukor, Annakin, Vidor, Buñuel, Welles, Lester, Siodmak and Kubrick. He also worked on some of the films of Ray Harryhausen, painting backdrops on the early ones and in camera glass shots for the last Sinbad films. He collaborate at the epic films produced by Samuel Bronston in Spain.

It was during these years after the huge experience working on the cheap low budget Italian films when he begun to get involved in some projects on a big or medium budget where they required his skills, and he could use foreground miniatures instead of the painting cut out, which was cheaper.

In Spain, he collaborated with Juan Piquer Simon on a series of fantasy and adventure films – generally made on a low budget. Piquer counted on with some other professionals of equal talent of Emilio, like Francisco Prosper. (Prosper, although was specialised on three-dimensional miniatures, he also made some matte paintings by himself)

In the early 80´s, Emilio had another lucky encounter with an Italian producer; this time was Dino de Laurentiis who came to Spain for the shooting of the first Conan film.
Emilio Ruiz was commissioned to build the miniatures. Due to the ample budget, he used foreground model miniatures for most of the shots and only made used of glass shots for some fast solving solutions.

De Laurentiis was so satisfied with his work; the he embarked him on his next futuristic epic project, Dune. Emilio Ruiz went to Mexico for almost one year to make the most big and spectacular foreground miniatures he had made to date.

During the last two decades, he kept working with his traditional techniques providing glass paintings, cut out miniatures and foreground models for Spanish, French, Italian and American films. With the advent of the digital era, he became probably the last practitioner of the old art of glass painting in the world. When all the matte painters around the world were forced to put aside their brushes for the digital palette, Emilio kept alive the tradition of the old pioneers, like Norman Dawn or Percy Day.
Some of his last contributions were “The Bridge of San Luis Rey” (2004), or “Pan’s Labyrinth” (2006)

In 2007, he was asked to collaborate on a documentary on his life and career. It was during the filming of the documentary “El ultimo truco”(2008) when he became ill and died at the age of 84, some weeks after filming his last foreground miniature and cut out painting trick. 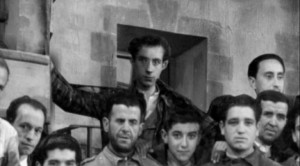 A young Emilio Rioz (right) with his mentor Enrique Salvá (left) in front of the sets for Alba de America.  The final painting below. 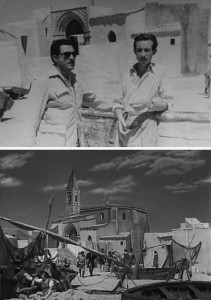 Emilio Ruiz at 1959 painting a glass shoot for Legionsof the Nile. 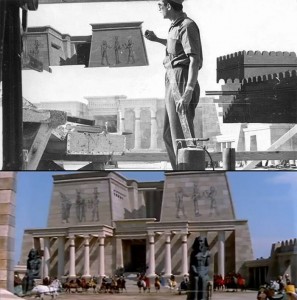 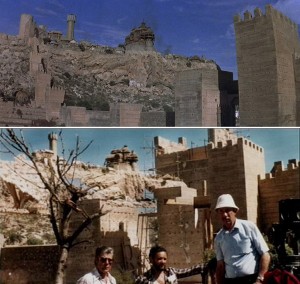 One of the last painting of Ruiz del Rio, for the film Luz de Domingo (2007) 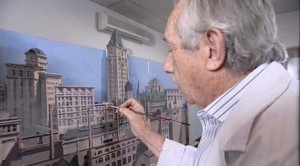 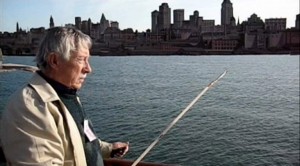 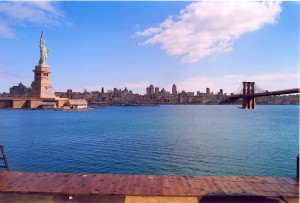 Full gallery is not available yet, but you can visit the old Site: