Biography:
Extract from his web site.http://ordazart.com/

From age 10 Ordaz studied with famed California master artist Theodore Lukits, a renowned art instructor.
Ordaz attended the University of Southern California on an art scholarship. After two years he then transferred to the Art Center College of Design in Pasadena to study illustration.
Upon graduation in 1980 Ordaz was highly recommended for a job with Industrial Light and Magic (ILM), working for filmmaker George Lucas in Northern California. There Ordaz did background matte paintings for specialized movie production effects and worked on films like “ET”, “The Wrath of Khan”, “Return of the Jedi” and “Indiana Jones and the Temple of Doom”, rubbing shoulders with well-known actors, musicians, directors and working with a talented production staff.
Ordaz even had a small bit part in Indiana Jones. He won an Emmy for his work as part of a team of artists working on the 1985 television movie, “Ewok — The Battle of Endor.”
Leaving movie work, and self-employed, his award-winning paintings and illustrations have been used in a line of Christian books, professional sports posters, specialty greeting cards and even a line of jigsaw puzzles.
He is currently involved in a portrait project for the U.S. Air Force, and teaching painting classes for children and adults along with painting portraits for clients out of his new studio Downtown.
Frank Ordaz with a painting for “The ewok Adventure. 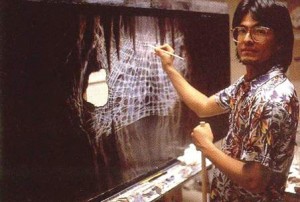 Frank Ordaz working at ILM matte department. The painting was made for “Return of the Jedi” 1983. 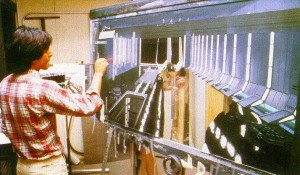 Again painting a matte for the Star Treck series, this time for Star Treck IV 1987. 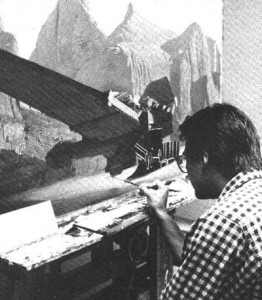 The final shot. Only the ramp and the area below the Klingon battle cruiser with some members of the Enterprise crew were included in the live action plate. The rest is the painting by Frank Ordaz.